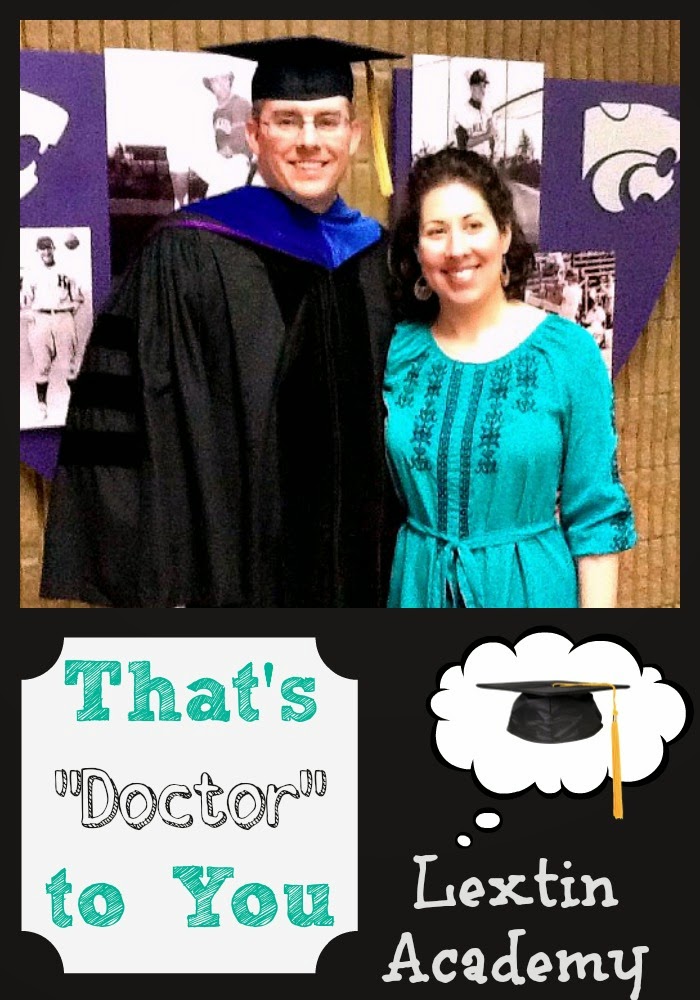 Did you know that my hubby recently graduated with his PhD? Yes, he did! I’m super proud of him too. I got to watch him walk across the stage and see his two professors place his hood over his head as he was handed his diploma.

I was so excited. Excited about the degree, yes, but mostly excited that it was OVER! After many years of school (many, many years people), he was done. Squeal! No more late nights of studying. No more early mornings at the computer. No more trips to his campus in Kansas. No more proofing his papers. This was a big thing too! Have you ever tried to read technical research papers? Ugh, awfulness!

So, now my hubby holds a doctorate in personal financial planning. He is passionate about financial planning and stewardship so his favorite thing is to help others figure out their finances. I’ll admit that I find it rather boring. But that’s why I didn’t get the degree……

He’s done, all done! That was 5 years of school, 2 children born, 5 moves, a new job, and many other little surprises along the way. What everyone asks is how he did it. He worked toward his degree part online and part in person/on campus while still maintaining a full time job as a manager for a financial institution. I homeschooled and managed our meals for kids with multiple food allergies. We had family time with our 5 children. We survived.

How did it work for us?

The path to his PhD was long and hard for both of us. But it has been well worth it for us. Now my hubby has a new role at work as a financial advisor – which he loves. He also gets to pursue his passion for teaching financial planning as a college professor for several universities.

I have to admit that I’m still not used to be married to my “doctor.” It’s still strange to look at his diploma and realize that we made it. We are done! I question when the reality of completion will set in. I’m still waiting to get over the wonder that we conquered the challenge of grad school together.

Whenever I call “honey” to my hubby in the house if I’m trying to locate him, he calls back, “That’s doctor to you!” Then I round the corner and find him and give him the “evil eye.” He always laughs, hugs me, and winks.

Yes, he’s the doctor but we both know it was a joint effort. Maybe I should be “Dr.” too………