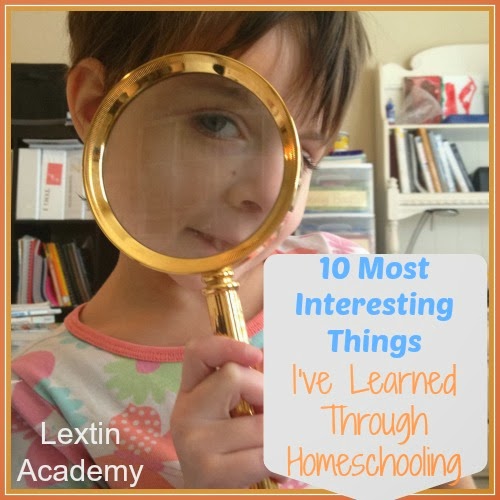 Homeschooling affords many learning opportunities.  However, no one told me that I would be the one doing much of the learning.  I’ve had the chance to go “back to school” as I teach my kids.  Now, we’re only up to 2nd grade but I’m fairly certain that I’ve learned more through teaching my kids than I ever did in all my years of school.

Here are the 10 most interesting (and somewhat random and strange) things I’ve learned this year:

1) Michelangelo was not too great looking.  Poor guy!  Also, he painted the Sistine Chapel standing up, not lying down.  He was not very friendly, kind, or personable.  While he may have been super talented, I’m not sure we could have been friends.

2) When you add a huge column of numbers it’s much faster the look for all the combinations that equal 10 and then only add the leftovers.  Hello former math teachers, why did you not teach me this trick????  And why on earth did it never occur to me before?

3)  Even though I absolutely love to read, teaching reading is something I absolutely hate doing.  Somehow I thought that I would enjoy this process.  I was very, very wrong!
There is a right way to read each word; however, children can come up with a million different sound combinations for the letters on the page – and most of them will be completely impossible phonetically.

4) When flies land on your food they vomit on it so they can reduce it to a liquid to sponge it up with their mouths.  Oh my goodness!  I just thought flies bothered me before……now I am completely a germ-a-phobe!
I may have gone out and purchased several extra sets of flyswatters.  I’m armed and ready for the warmer months and all the icky, yucky bugs!

5) A square is also a rhombus; a square is also a rectangle; a square is also a quadrilateral.  Ohhh, and an equilateral triangle is also an isosceles triangle.  Now I am utterly confused by shapes – to think that they can have more than 1 name or category!  Did I sleep through geometry class?
I simply thought there was a square, rectangle, triangle, and circle.  That’s what I teach my toddler.  I want that simplicity again!

6) I can now name all the 12 disciples in a cute sing-songy little chant.  One of them was Thaddeus (also called Jude).  What ever happened to that guy?  I don’t see much of him in the Gospels.  How did I miss him?  And he was also an author of one of the books of the Bible, you know, the book of Jude!

7) I can recite the Spanish alphabet in a fun song.  They have some strange letters in there – like the CH which is a “letter” (or actually two letters!) and LL which is another letter combo.  Newsflash – their alphabet is different!  Even after several years of Spanish I didn’t give it a second thought.  They have 29 letters!  Is more really better?
I have no idea how knowing the Spanish alphabet in song form benefits me but I’m ready just in case I ever need to break out in the alphabet song Español style (and if you press the option key then the letter “n” and then “n” again you can get that fun squiggle over your “n” when you’re typing).
¿Don’t you want to try it?  ¿And now you’ll have to look up how to do the fun question marks too, won’t you?

9) I knew about the Bubonic Plague (caused by fleas living on rats).  But I had no idea the impact it had on the world at that time.  We learned how it spread rapidly over 5 years and the superstitious beliefs that people had about staying well and avoiding the sickness.  However, I never realized that the Black Death marked the end of the Medieval Ages.  It also changed society in that the feudal system fell apart because there were not enough nobles (and many peasants moved into the manor houses of deceased nobles) and the peasants were in high demand (because there were so few of them) so they were able to demand higher wages.

10) And my very favorite thing I have learned – the cycle of apostasy.  What is this?  It’s a cycle of rejecting God by someone who formally embraced Him and then doing it all over again.  This describes the Israelites in the book of Judges.  They were the embodiment of a cycle of apostasy.  And the best part of this lovely tidbit of information?  My kids actually taught it to me.
I pull out our Bible lesson for the day on Judges chapter 2.  The kids look at the fun cartoon depictions of the story while I explain that we are studying Judges.  That’s when my kids (ages 4, 6, and 8) all scream, “It’s the cycle of apostasy!!”  Ummm, do what?  I give them the deer-in-the-headlights look and they smile sweetly and explain the wonderful theological terminology they have just used on me.  They learned it from a What’s in the Bible? DVD.

Yes, homeschooling……..you will learn things.  You will be baffled.  Your mind will be blown.  You will be grossed out.  You certainly will be dazedly confused.  And your kids just might school you!
Linked up with List it Tuesday!